24.03.2008
Expedited deliveries in the Baltics and Scandinavia >

Much like its parent company in Estonia, the Latvian business unit is committed to environmental awareness and a future-oriented, caring mindset. Take for instance the participation in the year’s biggest public event, Cleanup 2008, as both a sponsor and contributing actual workforce to clean up the rural area known as Carnikava. The event was dedicated to the 90th anniversary of Latvian independence. The decision to take part was reached quickly and unanimously as the environmental awareness of the employees had been well-known for years. 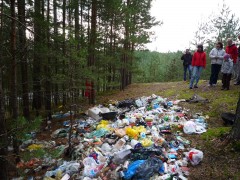